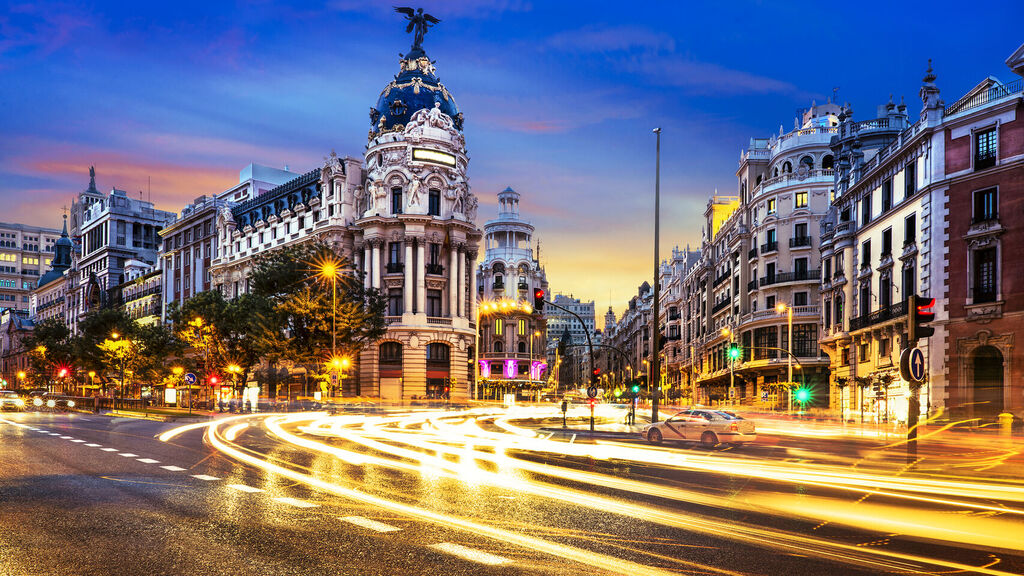 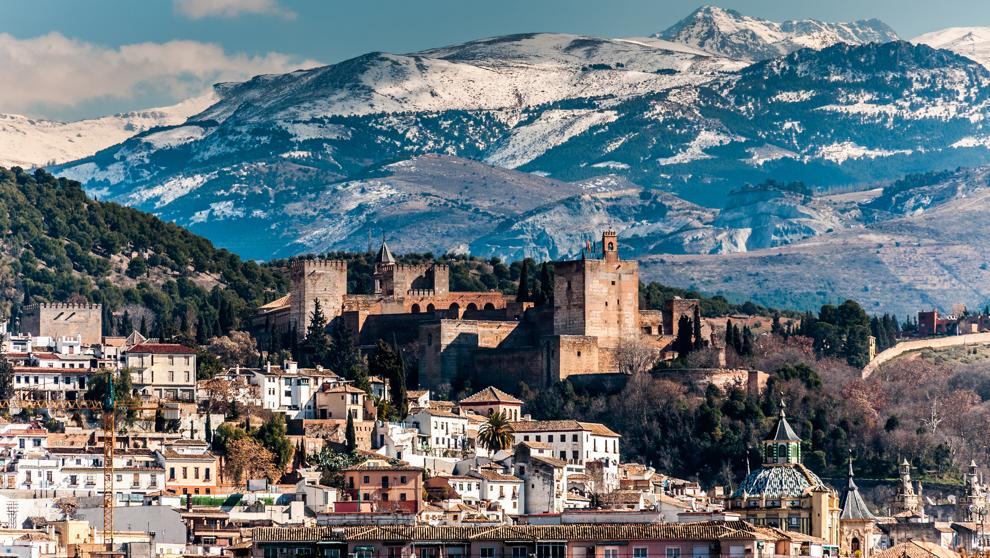 Granada is the capital city of the province of Granada, in the autonomous community of Andalusia, Spain. Granada is located at the foot of the Sierra Nevada mountains. The Alhambra, an Arab citadel and palace, is located in Granada. It is the most renowned building of the Islamic historical legacy with its many cultural attractions and architectural elements that make Granada a popular destination among the tourist cities of Spain. The Almohad influence on architecture is also preserved in the Granada neighborhood called the Albaicín with its fine examples of Moorish and Morisco construction. Granada is also well-known within Spain for the University of Granada which has an estimated 82,000 students spread over five different campuses in the city. The pomegranate (in Spanish, granada) is the heraldic device of Granada. 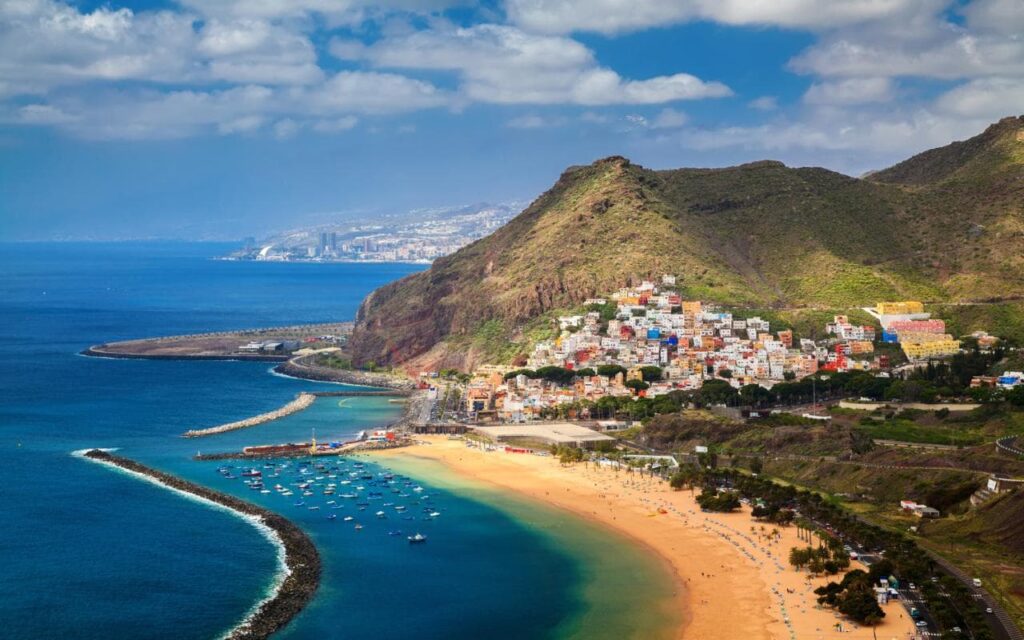 Tenerife is the largest and most-populated island of the eight Canary Islands. It is also the most-populated island of Spain. The island is home to the University of La Laguna; founded in 1792 in San Cristóbal de La Laguna, it is the oldest university in the Canaries. The city of La Laguna is a UNESCO World Heritage Site. It is the second-most populated city on the island and the third in the archipelago. It was the capital of the Canary Islands before Santa Cruz replaced it in 1833. Teide National Park is also a UNESCO World Heritage Site and is in the center of the island. In it, the Mount Teide has the highest elevation of Spain, the highest of the islands of the Atlantic Ocean, and is the third-largest volcano in the world from its base. Also on the island, the Macizo de Anaga (massif) has been a UNESCO Biosphere Reserve since 2015. It has the largest number of endemic species in Europe. 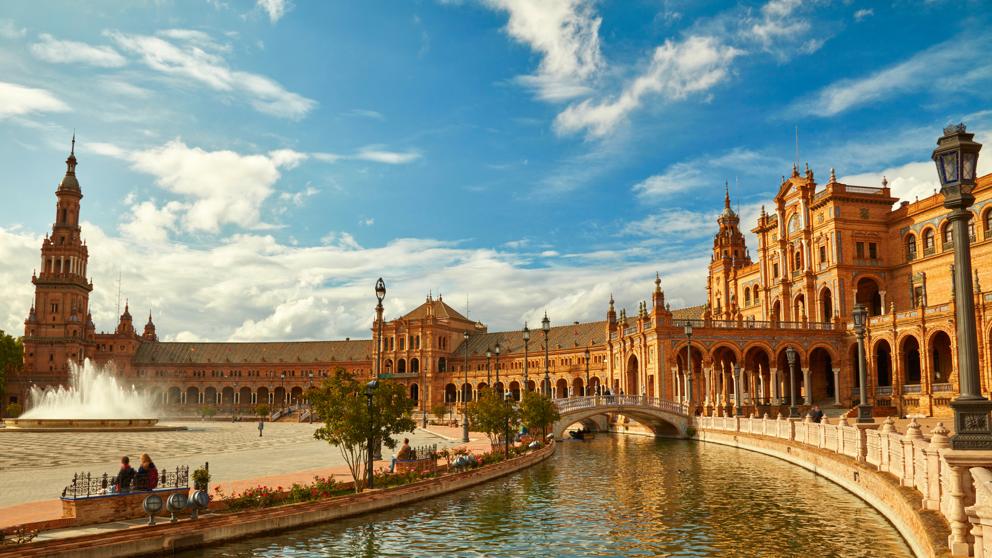 Seville is the capital and largest city of the Spanish autonomous community of Andalusia. It is situated on the lower reaches of the River Guadalquivir, in the southwest of the Iberian Peninsula. Its old town, with an area of 4 square kilometres, contains three UNESCO World Heritage Sites: the Alcázar palace complex, the Cathedral and the General Archive of the Indies. The Seville harbour, located about 80 kilometres from the Atlantic Ocean, is the only river port in Spain. Seville was founded as the Roman city of Hispalis. It became known as Ishbiliyah after the Muslim conquest in 711. During the Muslim rule in Spain, Seville came under the jurisdiction of the Caliphate of Córdoba before becoming the independent Taifa of Seville; later it was ruled by the Muslim Almoravids and the Almohads until finally being incorporated into the Christian Kingdom of Castile under Ferdinand III in 1248. After the discovery of the Americas, Seville became one of the economic centres of the Spanish Empire as its port monopolised the trans-oceanic trade and the Casa de Contratación (House of Trade) wielded its power, opening a Golden Age of arts and literature. Coinciding with the Baroque period of European history, the 17th century in Seville represented the most brilliant flowering of the city’s culture; then began a gradual economic and demographic decline as silting in the Guadalquivir forced the trade monopoly to relocate to the nearby port of Cádiz.

Madrid is the capital and most-populous city of Spain. It is the second-largest city in the European Union. As the capital city of Spain, seat of government, residence of the Spanish monarch, Madrid is also the political, economic and cultural centre of the country. While Madrid possesses modern infrastructure, it has preserved the look and feel of many of its historic neighbourhoods and streets. Its landmarks include the Plaza Mayor, the Royal Palace of Madrid; the Royal Theatre with its restored 1850 Opera House; the Buen Retiro Park, founded in 1631; the 19th-century National Library building (founded in 1712) containing some of Spain’s historical archives; many national museums, and the Golden Triangle of Art, located along the Paseo del Prado and comprising three art museums: Prado Museum, the Reina Sofía Museum, a museum of modern art, and the Thyssen-Bornemisza Museum, which complements the holdings of the other two museums. Cibeles Palace and Fountain has become one of the monument symbols of the city.

Barcelona is a city on the coast of northeastern Spain. It is the capital and largest city of Catalonia. It is one of the largest metropolises on the Mediterranean Sea. Founded as a Roman city, in the Middle Ages Barcelona became the capital of the County of Barcelona. After merging with the Kingdom of Aragon, Barcelona continued to be an important city in the Crown of Aragon as an economic and administrative centre of this Crown and the capital of the Principality of Catalonia. Barcelona has a rich cultural heritage and is today an important cultural centre and a major tourist destination. Particularly renowned are the architectural works of Antoni Gaudí and Lluís Domènech i Montaner, which have been designated UNESCO World Heritage Sites. Since 1450, it is home to the University of Barcelona, widely considered the most prestigious university in Spain. The headquarters of the Union for the Mediterranean are located in Barcelona. The city is known for hosting the 1992 Summer Olympics as well as world-class conferences and expositions and also many international sport tournaments. Historic buildings and monuments: Sagrada Família, Palau de la Música Catalana and Hospital de Sant Pau (included in the UNESCO Heritage List in 1997), Park Güell, Palau Güell, Casa Milà (La Pedrera), Casa Vicens, Casa Batlló, the Cathedral of the Holy Cross and St. Eulalia (Gothic), Gothic basilica of Santa Maria del Mar, Gothic basilica of Santa Maria del Pi, romanesque church of Sant Pau del Camp, Palau Reial Major, Monastery of Pedralbes (gothic). 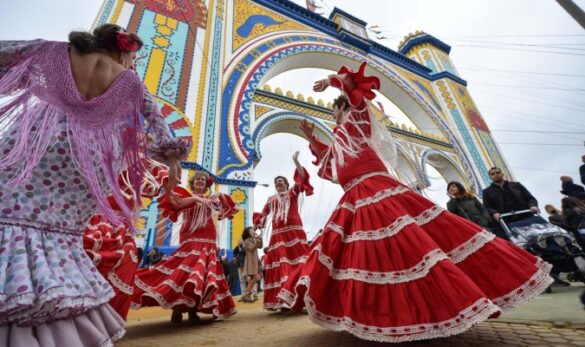 FERIA DE ABRIL Feria de Abril de Sevilla (Seville April Fair) is held in the Andalusian capital of Seville, Spain. The fair generally begins two weeks after the Semana Santa, or Easter Holy Week. The fair officially begins at midnight on Saturday, and runs seven days, ending on the following Saturday. Each day the fiesta begins with the parade of carriages and riders, at midday, carrying Seville's leading citizens which make their way to the bullring, La Real Maestranza, where the bullfighters and breeders meet. 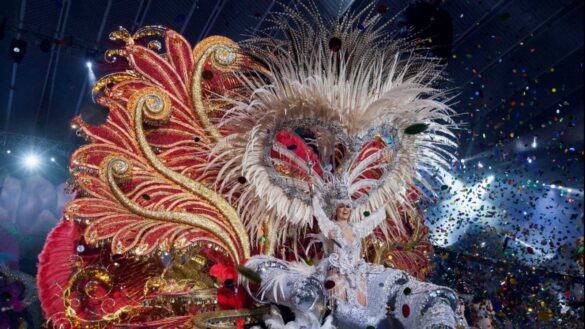 CARNAVAL DE SANTA CRUZ DE TENERIFE The Carnival of Santa Cruz de Tenerife is held each February in Santa Cruz de Tenerife. It is considered the second most popular and internationally known carnival, after the one held in Rio de Janeiro (Brazil). The festivities on the streets of Santa Cruz de Tenerife start on the Friday before Carnival with an opening parade, which reaches its height during the night when thousands of people in fancy dresses dance until the early hours of the next day. The party continues night after night until Ash Wednesday. That day, people of Santa Cruz de Tenerife celebrate the "entierro de la sardina" (burial of the sardine), and with this event the carnival is officially over. However, the party starts up again the following weekend, known as the weekend of the piñata. 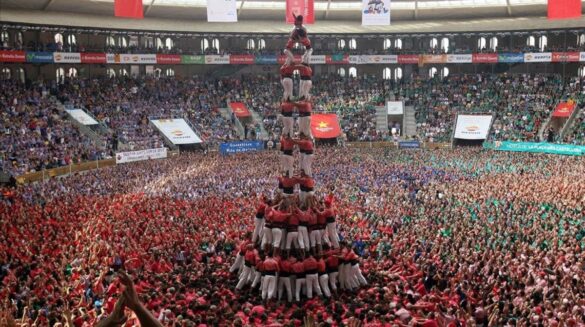 ELS CASTELLERS A castell is a human tower built traditionally at festivals in Catalonia. At these festivals, several colles castelleres (teams that build towers) attempt to build and dismantle a tower's structure. On November 16, 2010, castells were declared by UNESCO to be amongst the Masterpieces of the Oral and Intangible Heritage of Humanity.

PA AMB TOMÀQUET Pa amb tomàquet ("Bread with tomato") is considered a staple of Catalan cuisine and identity. It consists of bread, which may or may not be toasted, with tomato rubbed over and seasoned with olive oil and salt. Sometimes, garlic is rubbed on the bread before rubbing in the tomato. It is considered one of the typical examples that define the Mediterranean diet. It is popularly consumed on its own as a snack or a tapa with any meal, from breakfast to dinner. 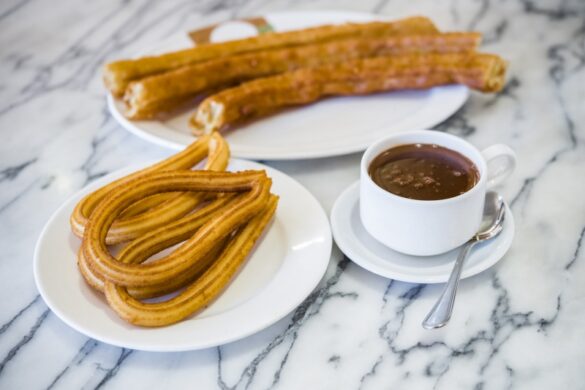 CHOCOLATE CON CHURROS A churro is a fried-dough pastry. In Spain, churros can either be thin or long and thick, where they are known as porras. They are normally eaten for breakfast dipped in hot chocolate. Sugar is often sprinkled on top. 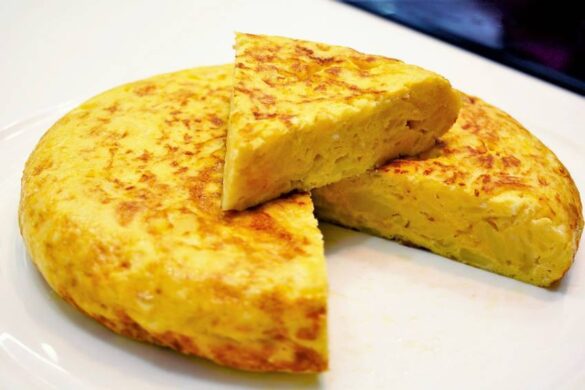 TORTILLA DE PATATAS Spanish omelette is a traditional dish from Spain and one of the signature dishes in the Spanish cuisine. It is an omelette made with eggs and potatoes, optionally including onion. It is often served at room temperature as a tapa. 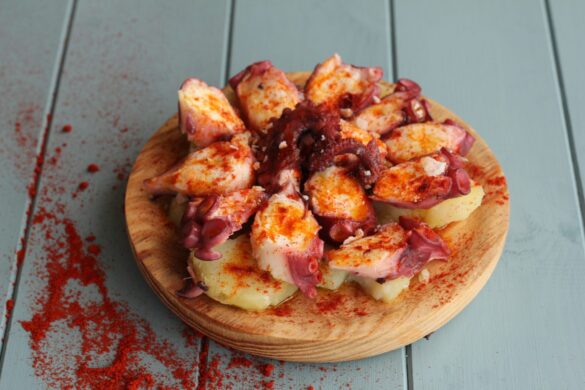 PULPO A LA GALLEGA Pulpo a la gallega is a traditional Galician dish. This dish is prepared by first boiling the octopus inside a copper cauldron. After the octopus has been boiled, it is trimmed with scissors, sprinkled with coarse salt and both sweet and spicy paprika (known in Galicia as pemento and pemento picante) and drizzled with olive oil.The dish is traditionally served on wooden plates and bread. Tradition dictates that water should not be drunk when eating octopus, so the dish is usually served accompanied by young Galician red wine. 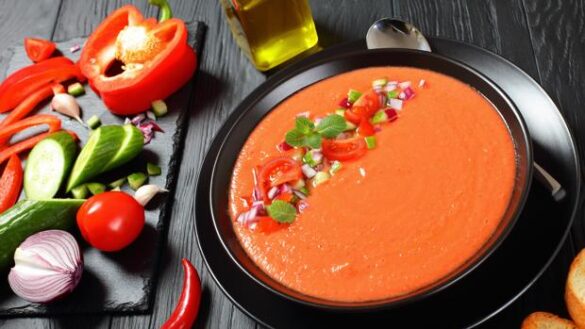 GAZPACHO Gazpacho, also called Andalusian gazpacho, is a cold soup made of raw, blended vegetables. It originated in the southern regions of the Iberian peninsula, specifically Andalusia, and spread into the Algarve regions. Gazpacho is widely eaten in Spain, particularly during hot summers, as it is refreshing and cool. 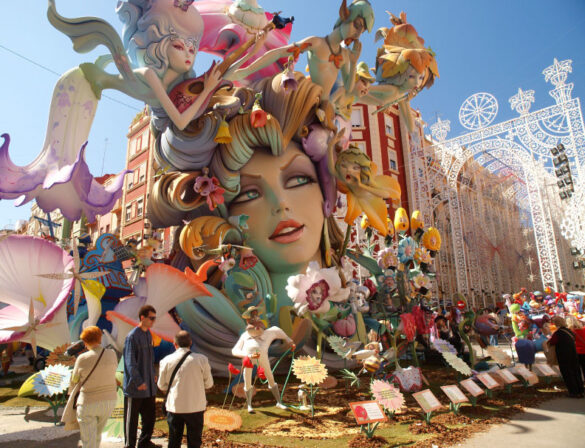 FALLES The Falles is a traditional celebration held in commemoration of Saint Joseph in the city of Valencia. The term Falles refers to both the celebration and the monuments burnt during the celebration. The Falles festival was added to UNESCO's intangible cultural heritage of humanity list on 30 November 2016. 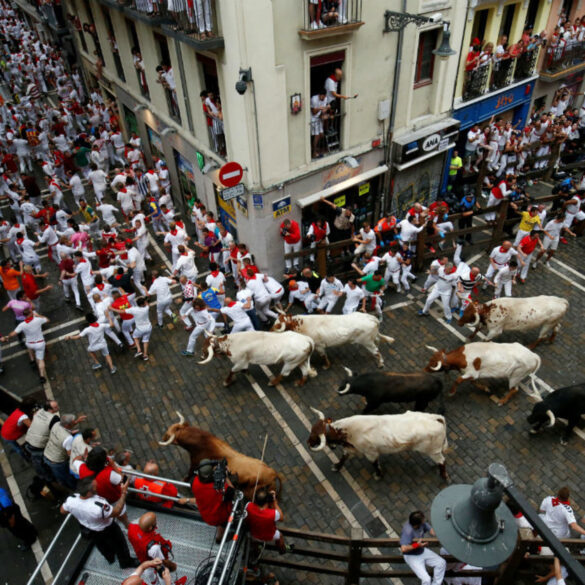 San Fermín The festival of San Fermín is a week long, historically rooted celebration held annually in the city of Pamplona, Navarra, in northern Spain. The celebrations start at noon on July 6 and continue until midnight on July 14. A firework starts off the celebrations and the popular song Pobre de mí is sung at the end. The most famous event is the running of the bulls, which begins at 8 in the morning from July 6 to 14, but the festival involves many other traditional and folkloric events. It is known locally as Sanfermines and is held in honour of Saint Fermin, the co-patron of Navarre.